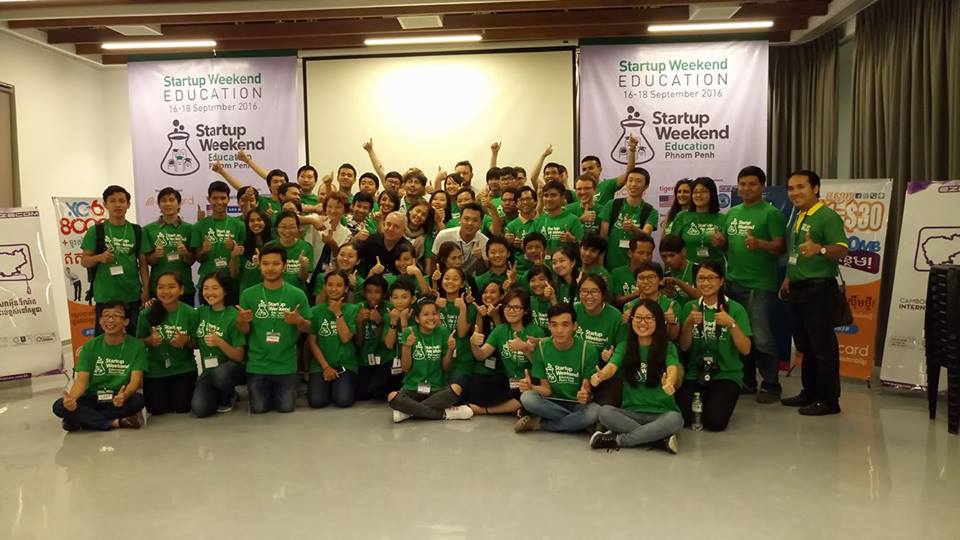 3 days long, Friday, Saturday, and Sunday. On my weekend I was attempted at the startupweekend event which was a global event where different kind of people all come together to create a sort of services or products in the category of business. It was a really experiential event where I learned about the business canvas and actually tried to implement this business to Cambodia. In a team of 5 with different skills such as but not limited to programmers, designer, survey and business model. Without communication, collaboration, networking we wouldn’t come up with this amazing idea where we could help the foreigner to have a good visit in our country. So basically in our app, we created a service for the visitors so that they can have the access to the information of the hotel, food, culture, temples, and others communication service. Even though we didn’t win but we proud of our idea and the commitment that we put into this business. One of my favorite highlights was to do networking with others people like the entrepreneur and seek help from them to help with our business model.

When the Sun rays every planets in our glassy get the sunlight and one of those planets is the Earth. As we know sunlight help to warm our atmosphere. When the Earth go around the Sun all the places in our atmosphere get the sunlight. That supports most life form or survive in this planet especially plants. As the rays enter to our atmosphere most continue down to the Earth’s surface. When the rays hit any substance (soil, water surface, etc) those rays release much of their energy as heat. Some of this heat radiates back into space. So, what actually caused the climate change?

The carbon dioxide is the primary issue that causes the climate change. The fossil fuels that left from the animals and plants in the ancient time. The products from fossil fuels, such as gasoline and diesel fuel that uses for the engine’s power to drive cars, airplanes and ships. Human uses is a large impacts that causes the climate change. When they use those fuels to run a machine it’ll create carbon dioxide then release back to our atmosphere. Carbon dioxide, methane and water vapor are the gases that retain heat, so those gases are the part that helps to warm our planet too. The gases do this by absorbing the heat and radiate back to Earth’s surface. Those gases nicknamed is “greenhouse gases”. Carbon dioxide in the atmosphere have been increased 30 percents from the last 650,000 years to now. Carbon dioxide rise up “is essentially and completely due of burning fuels” Susan Solomon says.

People have further increased the levels of greenhouse gases by changing the landscape. Plants help our atmosphere to have less carbon by take the carbon dioxide to make the food in a process called photosynthesis. But by cutting down trees and forests for farmland and other human uses, more carbon dioxide enters the atmosphere. “We’ve always had some greenhouse gases in the atmosphere” Solomon says. “But because we’ve burned a lot of fossil fuels and deforested, we’ve increased the amount of greenhouse gases and as a result have changed the temperature of the planet.”

Earth is warming and sea levels are rising. There’s more carbon dioxide in the air, so Arctic ice is melting faster than at any time throughout the history. As more people are burning fossil fuels like coal and oil for energy it releases more carbon dioxide in the air. Indeed, more carbon dioxide is enters the more the planet warms. If burning fossil fuels doesn’t slow, the long-term climate impacts and effect could be. During that time the global warming even higher than what the scientists had expect. Snow and ice reflect sunlight back into space but as the snow and ice melt, sunlight can now reach to the water surface and ground. As this surplus heat rises, the air temperature even more higher that causes more and more snow and ice melt. Carbon dioxide is a huge affects to the global warming and this type of rapid impacts is called a “fast feedback”.

We have some sunlight and greenhouse gases that keeps us warm. When people use the fossil fuels to run the machines and burning coal and fuels for the energy. That creates a lot of carbon dioxide and increases the amount of greenhouse gases and causes the climate change. Plant is a part that helps to reduce the carbon dioxide in the air by the process called photosynthesis. But by cutting down trees and forests for farmland and other human uses. We lost a significant help from plants that usually help reducing the carbon dioxide but after deforested it involves more carbon dioxide enters our atmosphere. As a result form now to the future our planet will face a big crisis. The temperature is hot, so the organism or the living things can die and some places on Earth will lack of water.

When I was about 7 years old I lived happily with my parents, my grandma and my other two brothers. We lived together, helping each other and enjoy our life in our small community. My father was delighted person when I need something he always gives me. I still remembered the time when he made me an amazing wooden top toy. I played with my neighbor happily from day to day after school. A year later he left the family because he needed to work at other places. A few months later he was sick, so he came back home. My family and my relative tried to get him to the hospital and the doctors tried their best to save his life. But still they couldn’t save him and from that time he left me alone forever. In that time I feel really depressed and I could not talk at all. After my father passed away I learned an important lesson from that experienced which was open mind. I accepted the truth and I tried to not care much about it and still carry on my life with my family. Because of that experienced, that’s why I’m here, learning in a wonderful school that everyone dreams to come.

Everyone is not perfect but everyone has a reason why do they act that way. I’m really lucky to have an opportunity to come to learn in the Liger Learning Center with many other students around Cambodia. We live together with a happy life and joyful friendship but at the same time, we also faced many problems with each other. But that’s normal, everyone makes mistake but we need to keep in mind that blaming and shouting to each other is not the best solution. I believe that being a person who has an open mind and looking for a beneficial solution for everyone is the best behavior that everyone should have.

I experienced many problems from the past five years living in Liger. I noticed that myself and my friends when we have a conflict with each other sometimes we used violent words and disrespectful attitude to each other. Furthermore, I know that teenager reacted quickly and act what their feeling tell them to do. I’m also a teenager, sometimes I experienced and acted the same way as other teenagers feel. But now I’m different, I treat myself to become an open mind person, I understand the phrase of being an open mind person clearly which lead me to treat myself to react differently. Moreover, I experienced that when someone does something wrong to you, you started to feel angry, burning in your body and you can not ignore the problem. As a human being, we’re smart enough to control our self. However, sometimes we can not do anything about it. I, myself highly recommend everyone especially the teenagers to have the behavior of being an open mind person. Changing someone’s behavior is not the easiest thing to do in this world. But it’s not impossible and it’s late to change your behavior, your attitude and if you treat yourself carefully one day you will get it. Lastly, this is important maybe you think that it’s not important right now but in the future, you will need it in your career.