Liger student has different experience and has different knowledge to change Cambodia. For me my exploration is leadership and we learn about electrical safety and we make the games, book, and video to teach the student about electricity because the people in Cambodia they die because they get shocked and the kids are like to play with electricity. We make the book, games, and video because make the kids easy to understand. The trip that we go at Takeo we teach the young kids at the school and we show the games, book, and video about electricity safety and our group give the book, games to the school when the student wants to read to can know more about electricity. We read the english book to the student and teach some english word. When the student saw us have a trip can speak english and have a lot of knowledge the student will try hard when they learning and be brave to like us. We have another trip to Kep to teach the student we teach the same thing when we went to takeo but have some change make it more easy for the student. When have sheraton I am teach the kids from community about ecology and zoology. The cambodia people and people come from another country i am share a what I learn in forest ecology tell the people about trip to mondulkiri like what I saw people cutting the tree hunting the animals because some people they don’t know when we cutting tree and hunting the animals what is the problem.

In the TV Broadcasting group we learned about how to be a good emcee, film, and share the jobs. We divided into four jobs such as producer, research , editor, cameraman, and emcee. A producer has to make a script for emcee. The producer is the one that control all the job because producer tell what to do and check the information that we have . Also they need to make a storyboard and tell the cameraman what plot they want for the video. The research is the one that find the information to make the video and it is a big job because we need to have the good information. After all of this, they have to sit with the editor to tell what we want the video look like. A editor also has a hard work to do. They have to make sure that the video is right and what they want. A cameraman has to go to take a video with the producer. Before the emcee talks in the real show they have to understand what the script  about. In our class we made one documentary about Liger. Before we made a documentary we took some trips to some TV stations and met with the producer. We went to the CTN channel station and Apsara channel station. We got a lot of experience from the emcee and the producer. It helped us a lot when we made our documentary.

In this I had learn 7 steps that we can make the video:

– Pen(Move from left to right or right to left)

I learning about storyboard if we want to make a video we need to have a storyboard and in storyboard we need to draw something about the story or write to make more easy. Also if we forget we can look on the storyboard.

In Exploration round five we learned about Future Careers. We learned about how jobs will help Cambodia in the future. On the first day, we did personal profiles. We had to include our name, our strengths, our favorite things and our goal. We did that because we wanted everyone to know us when they came to our school. We also had a trip to SGFE (Sustainable Green Fuel Enterprise). It is the place where they make charcoal out of coconut shells. It really helps Cambodia because they take the waste pickers to work in there so that they have a good job and they can get money for their children to go to school. Also, they help the environment by recycling things. The next thing we did was the research project. We researched about the global problems. We got to choose our own topics. The topics were about Mekong River, chemicals in the food, poverty, nuclear energy, dengue fever and etc. Then, we went to job shadow. It means we are the shadow of the worker. We interviewed them about how they are working. Everyone got to go to two workplaces. The places that we went to are Northbridge International School, Plantation hotel, Small Word, Osja studio, A.N.D and more.

Critically read and interpret information from a range of infographic thus enhancing students’ contextual and global knowledge and understanding. 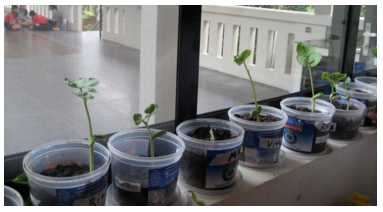 Course Description: The goal of the botany enrichment is to expose students to a specific branch of biology and scientific thinking and increase their knowledge about plants and the critical role they play on Earth.  Ideally the students walk away with a new appreciation and understanding of plants.

The students will become familiar with plant anatomy and the function of different plant parts.  The class is structured around the plant cycle:  We begin by studying dormant seeds and the function of the seed. We then explore the process of germination.  Students then learn about the roots and the stem and their functions. We then study the leaf, with a focus on photosynthesis. Finally students explore the anatomy of the flower and plant.

In botany I learned about plant and how do plant work and why it important to living thing on earth. In the class I have a lot of question that I wonder when I learn science most of the time I have more question to help myself to understand. When I learned in botany we had experiment with plants for a compile time before we started the experiment first we had some question like what happen if we put the plant in some where that don’t have wind or light what going to happen. After 3 to 4 day we come to check out experiment and we saw the plant is growing but the leaves is yellow. I thought that went the plant get the sunlight it will have green but when it don’t have sunlight it yellow and it will die. The plant need the soil to grow because the soil have a lot of nutrient and it help the plant to grow taller.

when we grow it on the paper it still grow but growing slowly. I still wanted to know why when the plant have sunlight it green. When I learn in Ecology and Zoology I don’t know why but when I learn in botany I knew that in the leaf of the plant it have a special cell that call Chlorophyll. 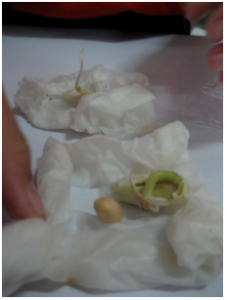 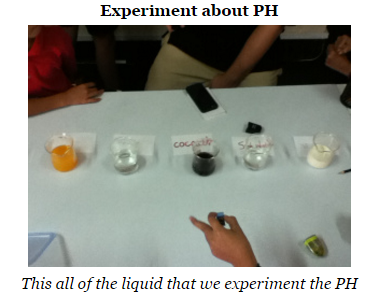 In our water group we learned about the pH of water. The full words of pH is Percent Hydrogen. That is the kind of scale that people use to measure the acids and bases. The scale of pH is 0-14. From 0-7 is acidic, 7-14 is basic and 7 is neutral. The hydrogen (H+) is acid and hydroxide (OH-) is base. When we learned about pH we did the experiment with 13 liquid things. For ex: the coca-cola and pond water. The coca-cola was 2.0 so it means acidic. If we drink it a lot like every day we would get sick but if we drink in 1 week only 1 it will be good. The pond was 10.0 so it means basic and if it has a lot of basic like this it also not good for our health either. So we can eat or drink only higher than 7 to 9 or lower than 7 to 5, so it not really have many bases or acids. In this class we also studied about algae. Algae is the kind of plants that live in water and it uses the sun as it food. When this plant lives in water it will make water become basic. We studied our own pond at Liger to learn about this. One other thing that we learned was the water cycle. We learned when the sun rises then it does the evaporation with water. When water goes up it is not yet become the clouds but when the temperature is cool then it makes condensation so it becomes the cloud. When the cloud in the sky catches the cool temperature it will become the rain again. To learn about water we went on the trip to RDI. RDI is the place that makes the water filters to sell. One thing that we learned from there is why they made this RDI place because they saw that some people here don’t have the clean water to drink so they can buy it to get the filter and clean for them. Another reason is when they sell the water filter they sell as cheaply as they can to help the people in Cambodia. 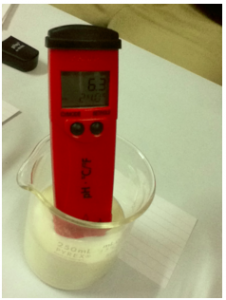 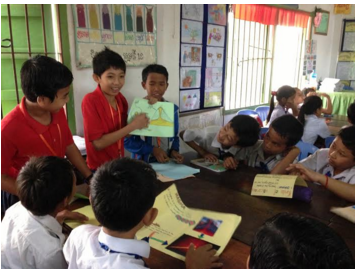 Description: In our crisis Exploration we learned a lot of things that happen outside in the environment. Crisis is the bad thing that happens to people and is unsafe to people. Example: the cars are crashing or the train is falling. We learned about what is a natural disaster. Natural disasters are caused by nature. Natural disasters are: earthquakes, avalanches, and storms, for example. Then we talked about a volcano. A volcano is the mountain that has magma inside. When it is erupting out, the magma will turn to lava. Lava can make islands when it touches the cold place and it turns to the rock. Crisis management is how the aid workers help people when there is a crisis. One way they help is by evacuating people away. Example: when it has a flood, aid workers evacuate people out to the safe place. We also took a trip to share with the students at the government school at Takhmao City. We chose this school because this is the old school that two Liger students have learned at before. We taught the students who were in grades 5 and 6. We shared some things that we learned like floods, storms, earthquakes, and avalanches. The students werevery smart to answer the questions and understand the information. 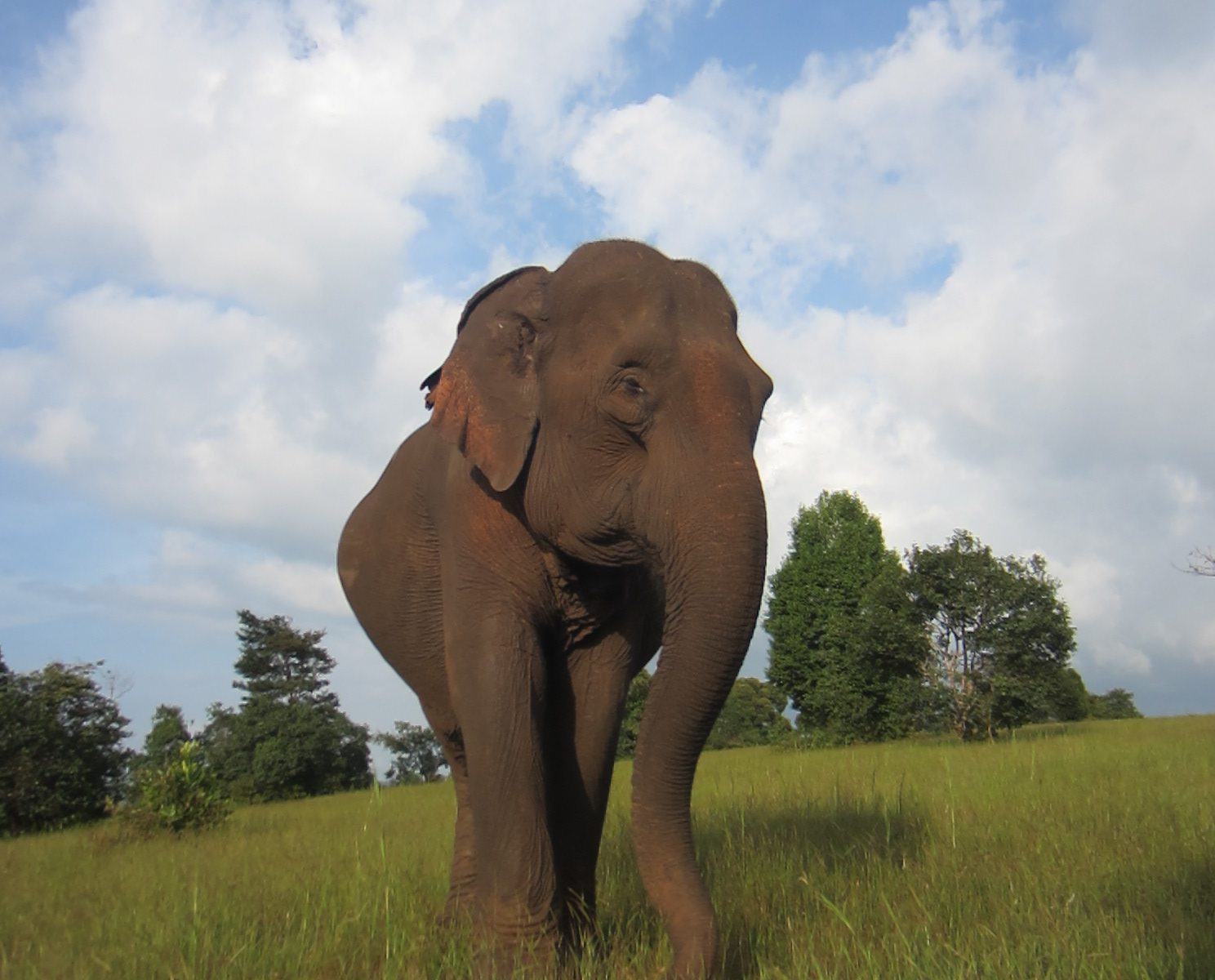 Ecosystem is the living things and the non-living things connecting with each other. Algae is the grate example of ecosystem because it take the sunlight for food and fish eat algae and then people eat fish so it have connection. In ecosystems class we had a journey book to take notes or write keywords that we don’t know what that word means. In Ecology class the first topic that we learned was tropical forest. We did not just learn only tropical forests but we also learned a lot of kinds of forests like conifers and others. A tropical forest is the forest that has rain a lot all year. We also learned about ecological relationships. Ecological relationships mean that one organism and another organism connect with each other. Ecological relationships are divided in five parts. They are parasitism, commercialism, predator-prey, mutualism and competition. Our Ecology group went to Mondulkiri province to study there. We spent six days at Mondolkiri. We met a lot of people like Bunong people. On Saturday we came back to our school and we shared what we learned.